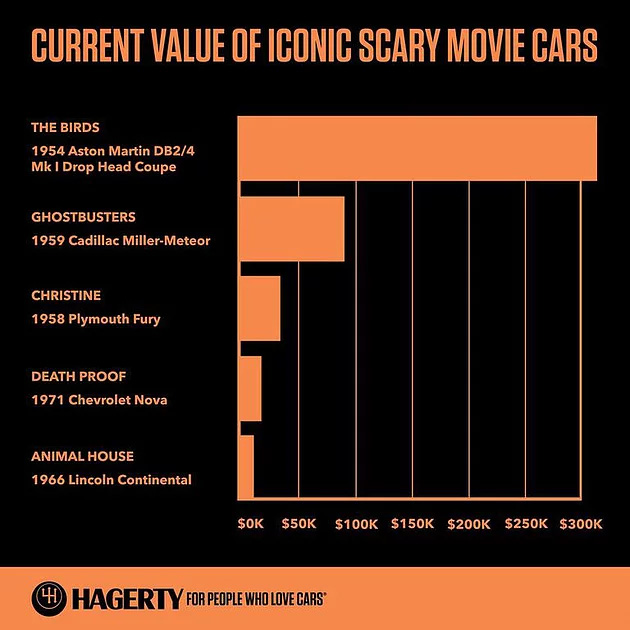 Automobiles often play an important supporting or even starring role in many of our favorite films, from Bullitt with Steve McQueen to, well, the Disney movie Cars. That’s certainly true of horror and monster movies as well, and what better time than Halloween to see what some of these scary movie cars are worth these days. Check out the folks at Hagerty’s iconic creepy car list!

When actress Tippi Hedren drove a 1954 Aston Martin DB2/4 Drop Head Coupe in Alfred Hitchcock’s 1963 film The Birds, it was already an older model, but still a perfect car for the California socialite that Hedren plays. Rumor has it that the car used in the film eventually had a 327 Corvette engine dropped into it and was totaled, but in today’s market a freshly restored example would bring over $400,000.

Like Doc Brown’s DeLorean, the Ghostbusters “Ecto-1” was a heavily modified version of an existing vehicle, in this case a long-wheelbase commercial chassis 1959 Cadillac built by Miller-Meteor. Barrett-Jackson sold one of the three cars built for the film in 2010 for $88,000, but the one actually used in the majority of filming would obviously bring more.

Christine, the 1958 Plymouth Fury from the Steven King novel and 1983 John Carpenter film of the same name about the car that kills people, is perhaps the most famous scary movie car of them all. A freshly restored red and white ’58 Fury would normally cost over $40,000, although Barrett-Jackson sold the real Christine (restored from parts on the cars used in the film) in 2015 for $198,000.

Kurt Russell’s heavily modified 1971 Chevrolet Nova in Quentin Tarantino’s Death Proof was a car in which the driver couldn’t be killed. While a stock example wouldn’t even set you back 20 grand, the car used in the film was listed on eBay a few years ago with a “Buy It Now” price of $69,000.

Finally, while Animal House isn’t exactly a horror film, the Deathmobile, (underneath it was the same 1966 Lincoln Continental used in several other scenes) used in the final parade scene certainly looks sinister enough. A good example is worth a little under $20,000, and with another few hundred dollars worth of paper mache, plywood, paint and probably some duct tape, you could probably have an exact replica done in a weekend.