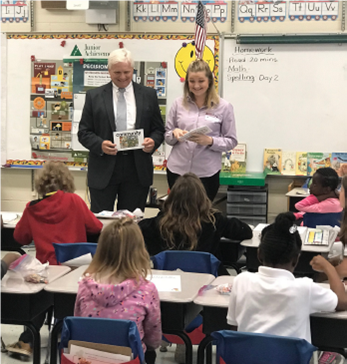 (April 30, 2018 — Salisbury, MD) On April 24 the second-grade students at Beaver Run elementary got “jobs,” earned a paycheck, and then discovered certain services in their city—thanks to a lesson from Salisbury Mayor Jake Day—are paid for by tax money. The students then handed over a portion of their pay to Maryland Comptroller Peter Franchot. The lesson was all part of Junior Achievement of the Eastern Shore’s (JA) Leadership Day at Beaver Run Elementary School. The students were presented with the JA Our Community® program, which was taught by volunteers from Avery Hall Insurance Group. Throughout the daylong program, the students cycled through engaging, age-appropriate lessons on topics such as how money moves through a community; different types of careers; and why people pay taxes.

“We were thrilled to not only be able to reach such a large number of students in one day, but also be able to present them with so many influential members of the community,” said JA president Jayme Hayes. “JA wants students to dream big and reach their potential, and what better way to encourage them toward success than to present them with real role models—people who live and work here and can show them the types of jobs they can have in our community?”